My, my, its been a busy holiday for us so far.

Much to do, and only so much time to do it all.

Let me think back and recall what we've been up to.

The weather was crazy here. Tuesday of last week I had lunch with my dad and it was bitterly cold and wet. Rain with a hint of sleet mixed in, strong winds, and hovering around 31 degrees. By that evening though it was approaching 50 or 60 degrees. 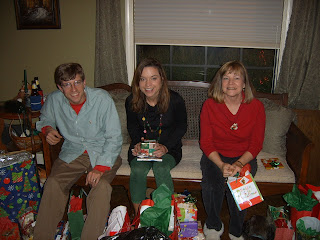 My work let out early on Christmas Eve. Krissi and I sat around relaxing until it was time to go to my mom's place for festivities. We headed up to Cordova and hung out with James and Keshia and Mom, had good food and sat around and chatted, then back to Horn Lake we went.


We slept in a bit on Christmas morning, springing from the bed around 9:30. I called Maddie to wish her a secular Merry Christmas when she informed me that she was on call today, instead of having to work all day, and so I had her go grab John so that they could join us for Christmas 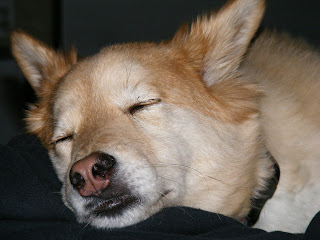 breakfast, which I think we did last year as well. Krissi and I opened presents from her family, and a few small things from each other. For those of you that see me, I'll be carrying a camera around constantly, since I intend to take pictures with it on a daily basis for the next year. Travis and his roommate, Jessie, came over, followed shortly by Maddie and John and their dogs, and we all had delicious breakfast together and sat around and chatted.


Around noon, we talked Travis into going to grab his copy of Tropic Thunder to lend to us. So Travis and Jessie headed off for more Christmas festivities elsewhere, while the Williams' settled in on the couches. Later, after movie watching and maybe just a tiny bit of couch-napping, we headed off in search of food. We ended up at Fox and Hound for supper, and then back to our place for some more relaxing on the couch. Eventually, we called it a night and the other Williams' headed off for distant Southaven.

Friday and Saturday have thoroughly bunched up together, and I'm at a loss to share with you the details. I fiddled with the new camera (a fujifilm S700), we played some Agricola, which John picked up over the holiday, I ran a D&D game for my little crowd plus our friend Todd. We even got to see the Youngers for awhile. 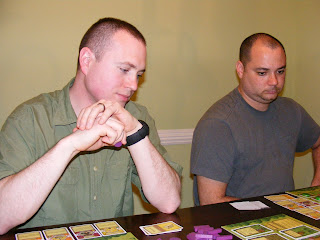 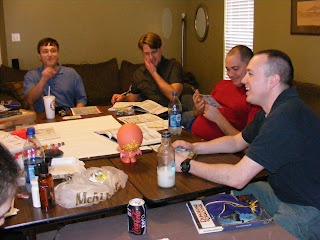 On Sunday I got up and cooked Rouladen to take to my dad's house for festivities in the afternoon. Krissi and I ran by Kohls to spend some gift card money, and we both came away with new shoes. Woo! We made it to my dad's place for a chaotic christmas, complete with at least 6 children under the age of 4 years. We had a good time though, and ate well. 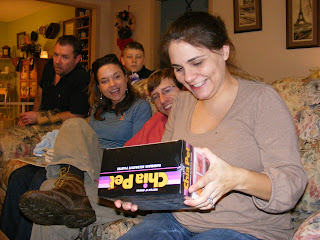 We were so busy over the holiday, that I was not ready to get back to work today. I could so have used another two days just to relax. But the holiday was fantastic. We had a great time, and spent it with awesome friends, and terrific family.

Things that I did not get time to do at all, that need to be done:

Fix fallen board and busted gate on our back fence.

Continue painting the nursery. There is a deadline of sorts.
Posted by Jerm at 8:56 AM No comments:

Things that I am up to:

As I've mentioned a few times now, I feel like my blogging here is really falling off. My D&D game is still going, but I have been a huge slacker about typing up session recaps or anything. On the running front, I need to change my blog name to "not running with dice", because I'm not running. Its, well, just too damn cold. Like I do every year, I stop running when it gets cold, even though every year, I swear I'll do better.

But here's what I'm really up to: Obsessing about a computer game. Surprised? You shouldn't be.

Its called "Chaos Gate", its a turn based tactical combat game set in the Warhammer 40k universe. It was released in 1998 (!!!!), and I played the hell out of it and loved it. It was a little crashy even back then, and once I moved from Windows 98 to Windows XP, I never was able to get it really running. All crash and no play. Every year or two I would pull it out and install it, and try for an hour or three to get it to run, and then put it back in its place amongst the other computer games. Well, I decided to pull it out again, and even found some info on some people who had gotten it to work under XP. Woo! Only now I can't find it. Apparently its gone to the same place as my copy of Fallout Tactics- Brotherhood of Steel went. Which is to say that I have no idea where the hell it is. I'm naturally a little bit obsessive, and something like this kicks my obsessive gene right in the balls. I went home for lunch today and tore apart the "computer closet" looking for it. I checked all of the cd cases and everything. Nothing. We purged some of the crap games that I had, and a bunch of empty jewel cases, and I hope that it did not accidentally get thrown out with those. It also could simply be stuck in a drawer somewhere. I mean, my house is not *that* big, but there's tons of out-of-the-way places that it could be. So, meanwhile, I'm downloading the torrent of it. But still, I'm mighty melancholy about not being able to find it. Remember that I'm a huge game nerd. I still have the blue 3.5 inch floppy disk for Civilization on the Amiga (!!!).

Speaking of collecting things, let's talk about my relationship with DVDs for just a moment. Krissi and I have a large-ish collection of DVDs. I have no doubt that there are collections that dwarf ours, but we have a goodly many of them. See, we (I, really, I think that Krissi is probably just my accomplice) like to buy DVDs. Because we like to collect them really. Its not that we don't watch them, because we do, we just don't watch them alot. Like - to be brutally honest, we probably only pop a DVD into the player and watch it like... maybe twice a month, and that's being kindof generous. And yet, I can sit here and think of half a dozen DVDs right off the top of my head that I'd buy if I could. And if you let me think about it longer, I'm sure I could come up with a few dozen. Because they're movies I like, and they're movies that I think that I'd like to own. Because I want to put them on my DVD rack and go, "See? Look at this movie I've got here!" And I'll do the same thing I do at least once every other weekend, and I'll say, "Hey you guys, let's watch one of these great movies that we've got!", and I'll always return to the same set, I'll say, "Let's watch Fight Club, or Seven, or Usual Suspects, or Memento, or Fargo!", or I'll get desperate, and suggest that we pop in Anchorman or SuperTroopers. And in the end, we'll watch The Soup, and flip through some channels, and the weekend will pass, and 99.99% of the DVDs on my shelf will continue to sit, untouched and unloved. Because the more movies I end up buying, the less likely I am to watch any one of them again. I'm not certain of my math, but it feels right. I think we may have a movie or two on the shelves that still are in plastic, because we bought them, eagerly brought them to their new home, pulled them out of the bag, held them aloft in glee, and stuck them in the DVD rack to gather dust with their peers.

What does any of this mean? I don't know either. But I think that I'm going to make an effort to not buy DVDs just because I liked them, anymore. Finances and economy aside, I just don't need to own them as much as I think that I do. Weird, huh?
Posted by Jerm at 3:18 PM 1 comment:

Just in case you don't know, Left 4 Dead is a game on the xbox360 and PC by Valve, the guys who brought us Half Life.. and Counter Strike. Its a zombie survival game, where you play one of four survivors, trying to shoot your way through the zombie hoards. Its fast and frentic, and I love love love love it. It plays great on single player, where you and three AI controlled survivors try to make it. But when you get three of your buddies together, you get a magical experience. For two weekends running now, we've assembled three of four of us over at John's place, and turned his fine dining room table into a computer bench. Networked, we try to survive the undead onslaught, yelling at each other for help, or conspiring tactically amongst ourselves.

So, I'll leave you with a request. Rush out and buy Left 4 Dead (or download it on Steam), and hit me up. My steam username is xxxjermxxx Together, maybe we can make it to the chopper.
Posted by Jerm at 2:50 PM No comments: