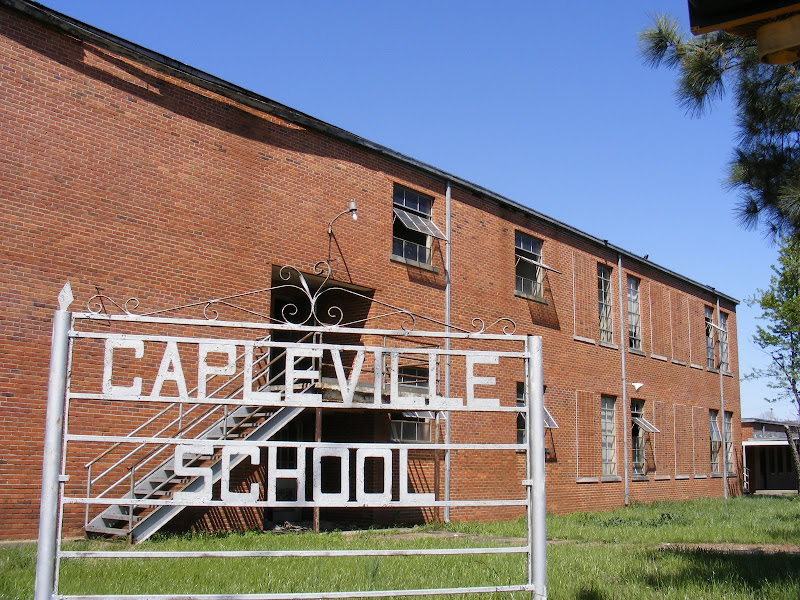 The abandoned Capleville School on Shelby Drive is always fascinating to me, in the way that abandoned structures are.

I stopped to take some photos, mindful that its in a shady part of town. I looked around before I parked, made sure that there was nothing or no one suspicious looking, and that I was in clear view of the road. I locked my car and walked up the sidewalk, checking the place out, taking some photos. I could peer into the courtyard within, and in though doors standing open. I have no idea at the story behind the place. How long its stood empty, or why. Though I'm sure its a dull story about city finances or zoning, or some new school building somewhere. It's brick, and I would guess its only stood empty for a few less-than-ten-years. Still, windows are broken, its weedchoked, and there are holes in the walls and vandalism. I very briefly thought about going inside, or even right up to one of the doors to take photos, but its clearly marked with no trespassing signs, and I have no idea what kind of ruffians might be lurking within. Urban spelunking certainly appeals to me though.

Just as I'm about done taking photos, and slowly heading back toward my car, which was still in eyesight, I see a light colored SUV pull into the little driveway where my car is parked. I figure maybe he's turning around, but no, he stops, just a dozen feet from my car and sits in the SUV, watching me. He looks hispanic maybe, youngish. Now I'm watching him, still taking a couple of quick shots of the school. I'm thinking "Great, I'm going to get robbed out here." Still, I'm standing 10 feet from the street, where there is some traffic. So I continue to mosey over, watching him watching me. My car is between me and him, of which I'm a little glad, since I'm going over worst-case-scenarios. I get within voice distance as I approach my car, and give him a friendly "How's it going?", I wonder maybe if he's stopped to ask me for directions or something. He asks "Do you know who owns this place?", and I'm like "Uh, no, not really....", and then I realize that I'm standing fifteen feet away from this sign. "It's city or county property I suppose."

He fishes around his neck for a second and then shows me a badge that's hanging from a chain. "I'm a cop," he says. "Oh good," I think.

He doesn't give me a hard time, and I volunteer that I'm just taking a few photos. He nods at me and pulls out onto the street and drives away. I hop into the car and drive away as well.

Ahhh, the tiniest hint of danger is exhilarating.
Posted by Jerm at 4:44 PM