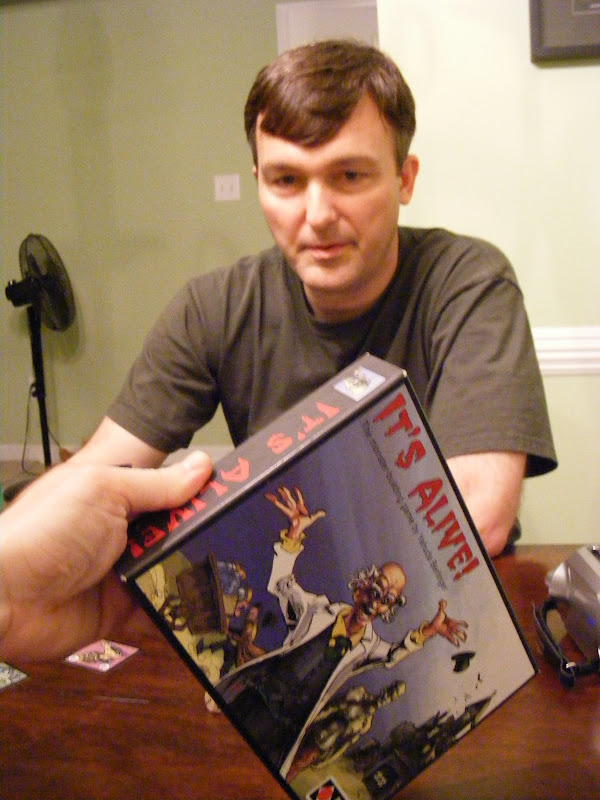 Do you know that I have never been to a con?

Most card carrying nerds have been to more cons than they have fingers; some, dressed as Boba Fett, Vash the Stampede, or Fuzzy the Furry Cat.

No seriously, last year, I thought very seriously about going to GenCon. Every year, I think about going to MidSouthCon, but its always on the weekend of my wedding anniversary, and so the timing is just never quite right. I had no idea that this year it was scheduled different, and it was held in Olive Branch. So I have a certain amount of guilt now about not having gone. Then again, its money and time that I didn't have in the first place.

ANYWAY - our old friend Todd was in town, and its always a treat to hang out and play a game with him. I mentioned in a previous post that Todd ran some old school Sword & Wizardry at the con, and chatting with him about it fueled the fire for me.

Also, we played a game of Agricola, and It's Alive. It's Alive was an immediate success for me, since I seem to love these fast, rather simple games.

Thanks for the 5 minutes of fame! It was a blast getting together with ya'll for a short time. My interest in these short games has also grown over the past year. I look forward to digging through your older posts for more body parts....